"It has been the best home improvement I have made on my house since I bought it. I used to be totally afraid, every time it would rain, my basement would flood, and since the put the basement system in, I not only not worry anymore, but I actually enjoy the sound of the rain again...my whole house smells better, everything is dry, everything works in order, and the customer service has been just absolutely unmatched. Anytime I have a question or concern, they are super quick to get back to me, super quick to take care of me, can't recommend them enough."
Alex S. of Sedro-Woolley, WA
Thursday, June 23rd
Melissa F. of Bellingham, WA
Thursday, May 5th
We helped Lisa from Bellingham, WA, find a permanent fix to her leaky crawlspace. Thank you to Michael's crew for installing a new drainage, sump pump, and encapsulation system to keep the home healthy & dry.
Lisa B. of Bellingham, WA
Wednesday, August 24th
I have been completely impressed with how everyone at Rainy Day has communicated with us about everything they planned to do. From the first sales call until the final day of work. Everyone went out of there way to make sure we knew what to expect next. The operations manager came out at the beginning of the project, and a job this big is definitely a project and went over the work one more time and gave us a rough schedule on when they expected to get the work done. He also kept us updated on the crews schedule on a daily basis because they were facing some unexpected weather challenges due to snow in the area. We had a couple of crews involved in the project and the foremen of each crew made sure we knew just what they were going to be doing that day when they arrived and then what they had accomplished just before they left in the evening. The only thing I would like to see is to have the operations manager come by one last time after the work was completed and inspect the final installation. I recently had a new roof put on by a small roofing company in the area and after the job was completed the owner of the company came out and inspected the work and found a few (very few) items he thought needed correction and had someone come out and fix them. I really appreciated that extra care since I am far from an expert on roofing. The same applies here with the crawlspace and the Rainy Day material. I'm far from being an expert on this part of our home so one last look at the work by someone who is would be awesome. Bottom line is I think the system should be very helpful in controlling both moisture in the crawlspace and therefore the house and in controlling rodents that are a constant issue when you live in a rural area with woods and fields surrounding the house.
Sherman B. of Sultan, WA
Tuesday, March 17th 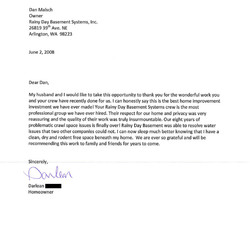 Dear Dan, My husband and I would like to take this opportunity to thank you for the wonderful work you and your crew have recently done for us. I can honestly say this is the best home improvement investment we have ever made! Your Rainy Day Basement Systems crew is the most professional group we have ever hired. Their respect for our home and privacy was very reassuring and the quality of their work was truly insurmountable. Our eight years of problematic crawlspace issues is finally over! Rainy Day Basement was able to resolve water issues that two other companies could not. I can now sleep much better knowing that I have a clean, dry and rodent free space beneath my home. We are ever so grateful and will be recommending this work to family and friends for years to come.
Darlean and Tim W. of Monroe, WA
Tuesday, January 3rd
Looks great, nice clean work. Dan seemed trustworthy. Trusted our referral also. Happy with the job :)
Renee and Patrick M. of Arlington, WA
Thursday, October 6th
They did a great job! VERY satisfied! In the past few months, we’ve had heavy snow, snowmelt, and rain, and we haven’t had a single problem with flooding in the basement. It looks like the problem is fixed once and for all!
Marli and Chris B. of Arlington, WA
Thursday, October 6th 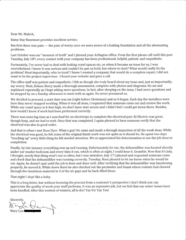 Dear Mr. Malsch, Rainy Day Basement provides excellent service. But first there was pain – the pain of worry once we were aware of a leaking foundation and all the attenuating problems. Last October was our “moment of truth” and I phoned your Arlington office. From the first phone call until this past Tuesday, July 18th, every contact with your company has been professional, helpful, patient and empathetic. Fortunately, I’ve never had to deal with leaking crawl spaces etc., so when it became an issue for us, I was overwhelmed. I knew it was serious and couldn’t be put on hold, but where to start? What would really fix the problem? Most importantly, who to trust? I knew I wanted a company that would complete the repair; I did not want to be the project supervisor. I found your website and gave you a call. The office staff was patient and empathetic. I felt as though she truly heard about my issue and, just as importantly, my worry. Next, Delano Berry made a thorough assessment, complete with photos and diagrams. He sat and explained repeatedly as I kept asking questions. In fact, after sleeping on the issue, I had more questions and he stopped by on a Sunday to meet with us again. He never pressured us. We decided to proceed, a start date was set (right before Christmas) and so it began. Each day the installers were here they never stopped working. When it was all done, I requested that someone come out and review the work. While our crawl space is 6-feet high, we don’t have stair access and I didn’t feel I could get down there. Besides, how would I know if work had been performed correctly. There was some lag tie as I searched for an electrician to complete the electrical part. Ki Electric was great, though busy, and we had to wait. Once that was completed, I again phoned to have someone verify that the electrical was in good order. And that is when I met Russ Dyer. What a guy! He came and made a thorough inspection of all the work done. While the electrical was good, he felt some of the original finish work was not quite as it should be. He spent two days “touching up” every little thing he felt needed attention. We so appreciated his determination to see the job done to completion. Finally, by late January everything was up and running. Unfortunately for me, the dehumidifier was located directly under our master bedroom and every time it ran, which is often at night, I could hear it grumble. Now that it’s July, I thought surely that thing won’t run so often, but I was mistaken. July 17th, I phoned and requested that someone come out and check that the dehumidifier was running correctly. Tuesday, Russ phoned to let me know when he would be out. Again, he doesn’t quit until the job is done and done well. After verifying that the dehumidifier was functioning properly, he moved it. While down there he also checked out the perimeter and found where rodents had chewed through the insulation material in 3 of the air gaps and he back filled those. That night I slept like a baby. This is a long letter, but without knowing the process from a customer’s perspective I don’t think you can appreciate the quality of work your staff performs. It was an expensive job, but we feel that our water issues have been handled. After this wettest of winters, all is dry! Yay us! Yay you!   Sincerely, Mary Lou D.
Mary Lou & David D. of Arlington, WA
Friday, July 28th
Satisfied so far. Your crew was polite, informative, considerate, hardworking, efficient. They were helpful and addressed our concern and questions. Showed exactly what our needs were and how they would be addressed. Loved the crew. We were presented with what needed to be done, proof, and solutions to our needs so knew what was expected and how it would be completed.
Alan and Kristy B. of Arlington, WA
Monday, November 27th 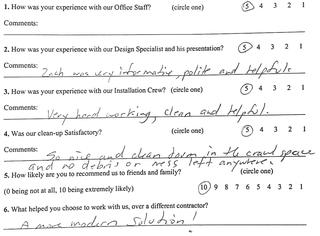 Zach was very informative, polite, and helpful. Installation crew was very hard working, clean and helpful. So nice and clean down in the crawl space and no debris or mess left anywhere. I chose Rainy Day for a more modern solution!
Andrew M. of Burlington, WA
Tuesday, October 25th
VERY satisfied. Thank you! Professional, courteous and friendly; a top-notch crew. All experiences were pleasant.
Cindy and Bob S. of Lake Stevens, WA
Tuesday, July 21st
We were very pleased with the crew. Jerry had a “teacher’s heart” as he explained everything to me. He was very knowledgeable. Also, I was thrilled that they went above and beyond what was contracted in helping me design and dig the outlet trench. Dan you run a fantastic operation! Thanks!!!
Jeff and Elizabeth T. of Snohomish, WA
Tuesday, July 7th 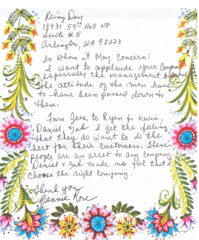 I want to applaud your company, especially the management, because the attitude of the men have to have been passed down to them.  From Jess, to Ryan, to Kevin, Daniel, Zach, I get the feeling that they do want to do the best for their customers. These people are an asset to any company. Daniel and Zach made me feel that I chose the right company.  Thank you, Bennie R.
Bennie R. of Snohomish, WA
Tuesday, January 19th
Crawl space looks great and smells good too! Kevin is such a hard worker. He worked by himself for several days.
Sandy D. of Mill Creek, WA
Thursday, November 6th
Extremely satisfied! When I called, my questions were courteously and quickly answered. Ed did not pressure me, answered all my questions and printed out the estimate the day we met. They (Tony, Vladimir, Donny and Tyler) worked with a smile on their face and so hard.
Sally D. of Mt. Vernon, WA
Tuesday, December 22nd
The best crew ever! Wyatt & Tyler were great. They worked hard & always kept me informed. Both were very personable. Office was very polite & friendly. Ed was very knowledgeable and did a great job explaining the options. You worked on my neighbor's crawl space & you did a great job.
Janice M. of Mount Vernon, WA
Thursday, December 2nd
Donny, Ramon, Vladimir were here for just 2 days. Hardly knew they were here. Left the place immaculate.
Tash B. of Mt. Vernon, WA
Monday, May 16th
I couldn’t have asked for an easier company to work with on this project. Dan was thorough and knowledgeable. Videos were educational and helpful. Donny, Ramon and Vladimir were here for 2 days. Fast and efficient. Left the place immaculate.
Martha R. of Mt. Vernon, WA
Monday, May 16th
Total testimonials : 323