David and Bonny R. had a strong mold smell coming from their Mount Vernon crawl space. Since 2008, they noticed that the crawl space had a musty odor when they opened the entrance. By May of 2017, they could not escape the smell upstairs. The homeowners reached out to Rainy Day, saying that the terrible smell was causing headaches and other sicknesses. After our free inspection and estimate, it was confirmed that the sump pump that had been installed by a different company a year ago had quit for the second time. Like most parts of Western Washington, Mount Vernon gets a lot of rain throughout the year, and Martin and Bonny wanted this problem to be fixed once and for all. They needed a drainage system that could keep up with all the water and a clean environment to be rid of the odor. The inspection also revealed a few other issues. First, the 13 wide-open vents along the crawl space walls had water inside them, contributing to the flooding and water damage to the crawl space walls and flooring. In addition to the leaking vents, the groundwater seepage, duct leakage, surface condensation and air moisture created a great home for mold, mildew and wood rot. The muggy damp atmosphere of the crawl space attracted bugs and the open vents allowed access. As seen in some of these pictures, Martin and Bonny’s home was infested with large spiders and their eggs. We installed a full drainage and encapsulation system, solving the leaking, mold and odor issues. We replaced the old inadequate pump with a TripleSafe, giving the homeowners a way to avoid the three most common problems with a pump system: pump failure, too much volume for a single pump and power outages. Moreover, to assure that the homeowners will know of any excess water leaking onto their floors, we installed a WaterWatch Floor Alarm. Outdoor water outlets were installed to take the water away from the home. The LawnScape Outlet camouflages the connection to the house’s downspout, sending water underground and up through slots above the ground in a designated area. Two IceGuards were also installed to dispose of any water that cannot make it out of the other pipes due to ice, snow, dirt or other debris. To keep outside water, air, and pests from coming inside the crawl space, we installed CleanSpace Vent Covers and an EverLast Door. The vent covers give the homeowners control of their indoor environment, providing an airtight and insulated seal that will not falter. Each vent has drilled-in fasteners, will never rot and will never need paint. In addition to also providing an airtight seal and never being able to rot, the EverLast Door will not warp or rust, giving David and Bonny an easy and efficient way to get into their crawl space. To complete the crawl space encapsulation, we installed SilverGlo wall insulation and CleanSpace liner. No matter the climate, it is important to insulate a crawl space—you do not want hot humid air in the summer when you are trying to cool down your home, and you do not want chilly air in the winter when you are using your heater. SilverGlow will allow the homeowners to save energy by providing a radiant barrier that reflects heat and lowers material conductivity. Providing further environment control, CleanSpace is a durable inorganic puncture resistant plastic liner that completely seals a house from the earth. No more leaking, flooding, water damage, pests, mold, unreliable drainage, unnecessary heating/cooling charges and smell. David and Bonny can now say goodbye to crawl space stress as well as odor headaches and sickness. 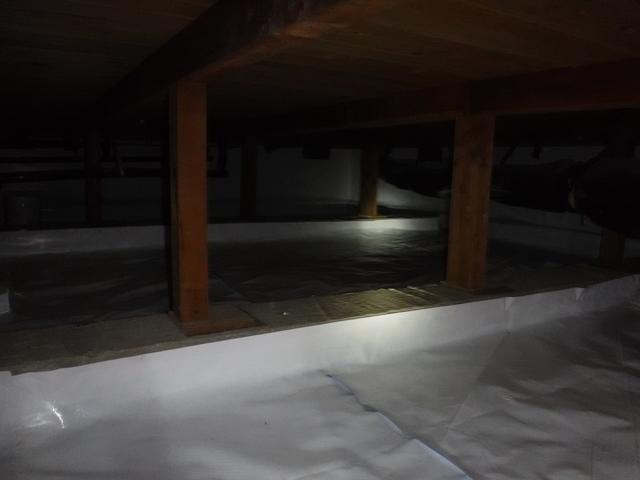 This crawl space is now encapsulated with CleanSpace, isolating the home from the damp earth. CleanSpace is permanently held in place, providing a reliable environment. CleanSpace will never mold or puncture, keeps out critters and provides stable humidity levels. David and Bonny now have a healthier home and comfortable living space. 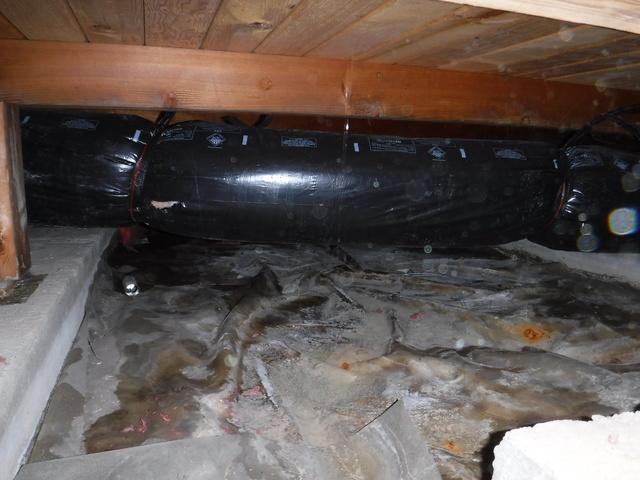 We removed all the wood pieces, rocks, fallen insulation and other rubble shown in this picture before installing the drainage and encapsulation system. 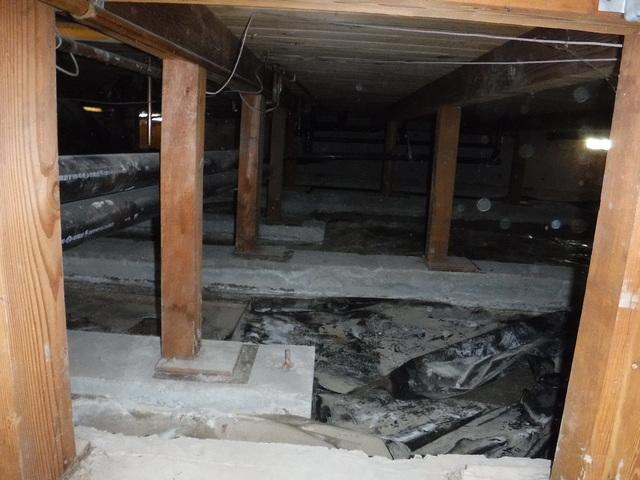 The black liner shown here had mold, rips and a loose improperly sealed layout. It was soaked with water puddles and was caked with dirt and other matter. 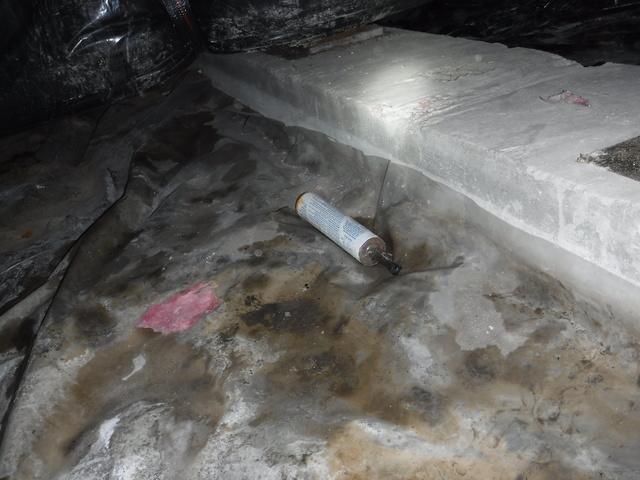 Unlike CleanSpace, the previous liner was not designed to withhold a clean environment. As shown, the old liner was molding, leaking and not sealed properly. CleanSpace has 7 durable layers, is manufactured with an antimicrobial additive, is puncture resistant, has great flexibility and is always securely installed with drilled-in fasteners, making it so that something like this never happens. 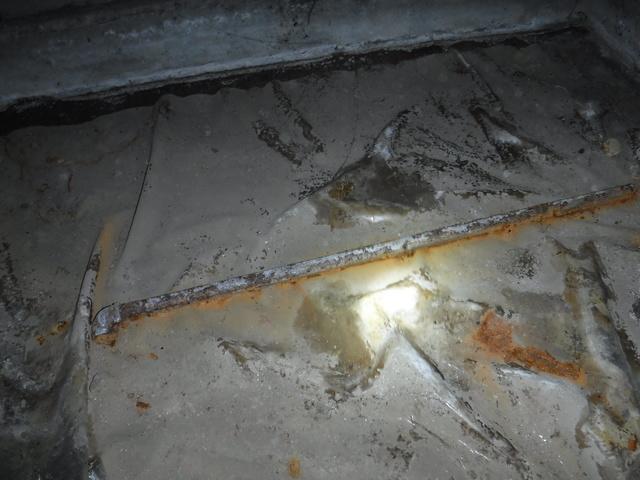 The water on the floors and moisture in the air created a perfect environment for rust and corrosion. 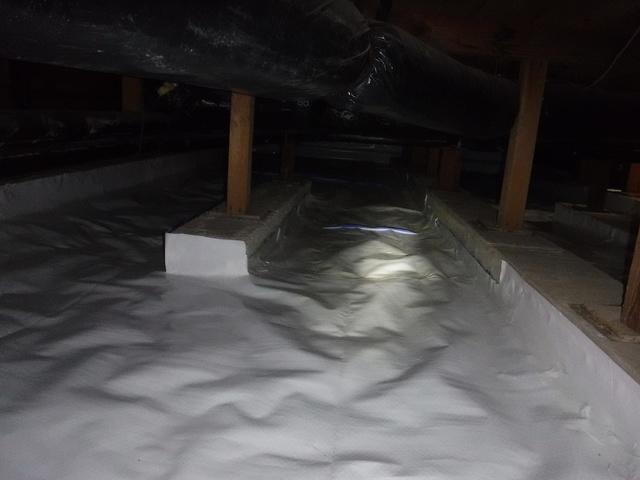 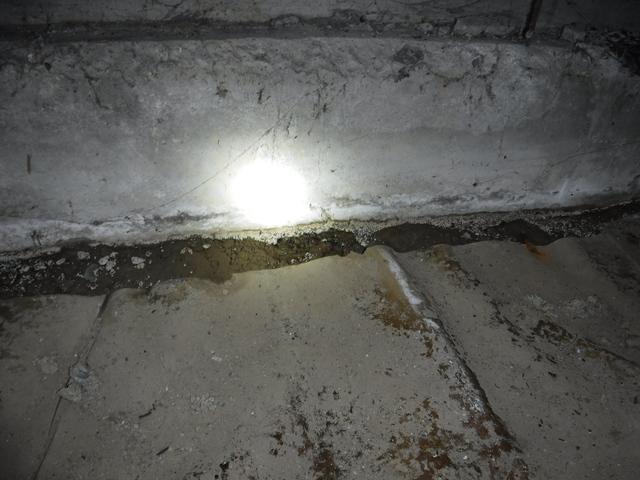 Water was coming in at the base of the walls, contributing the leakage, water damage and mold. 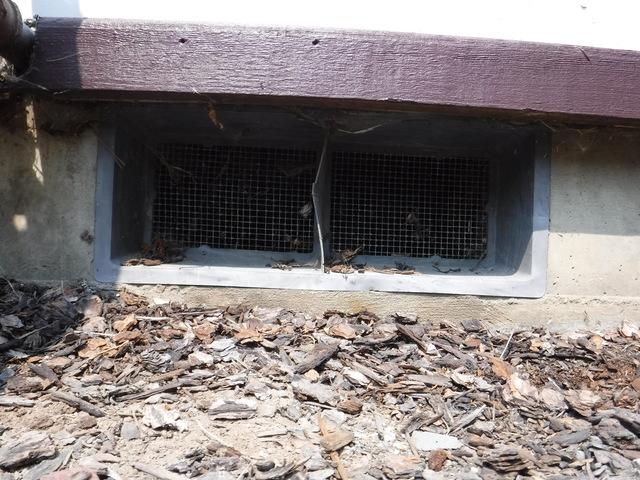 Before Vents Were Installed

The home owners had 13 open vents around their crawl space, letting in water, moisture, bugs and other pests. 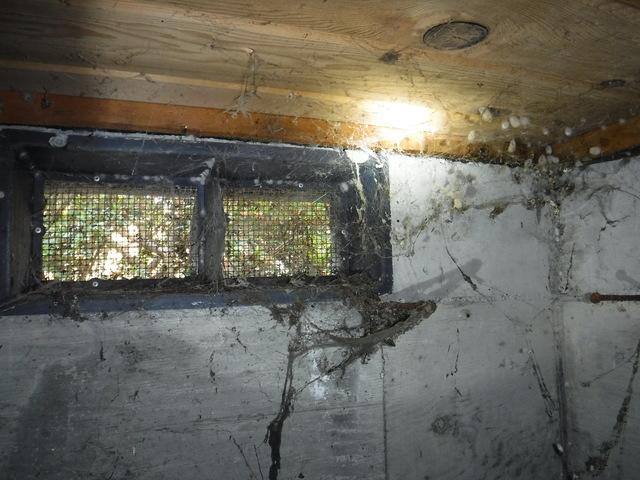 As seen in this picture, the vents were wide open, inviting in all kinds of unwanted bugs and water. To the right, you can see some of the many large spider eggs that covered the crawl space walls and ceiling. 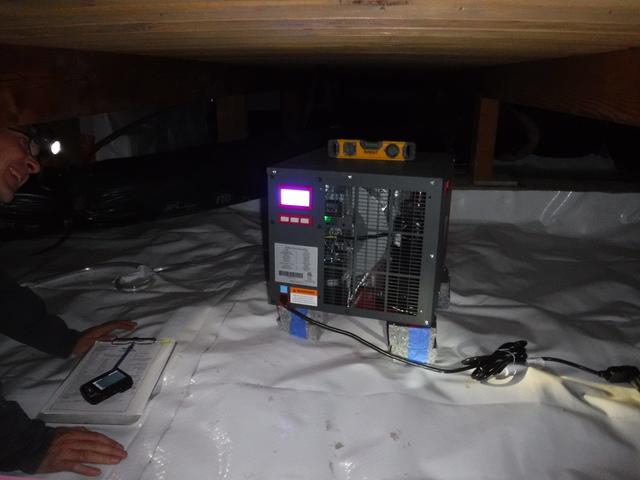 David and Bonny can now relax knowing that if they were to have a future leaking issue, an alarm will sound until water is no longer touching the base sensors of the WaterWatch. 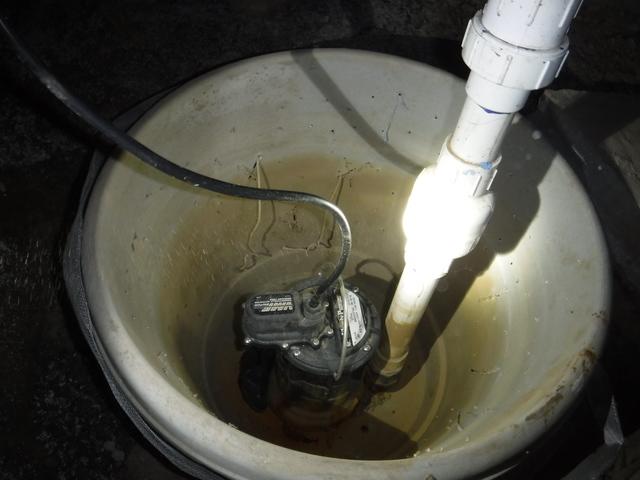 This pump here was installed by another company. The homeowners said that it was replaced a year ago when the previous one broke, and that they could hear it pumping often when it was working. It quit again on them, and they were seeking out a reliable drainage system. 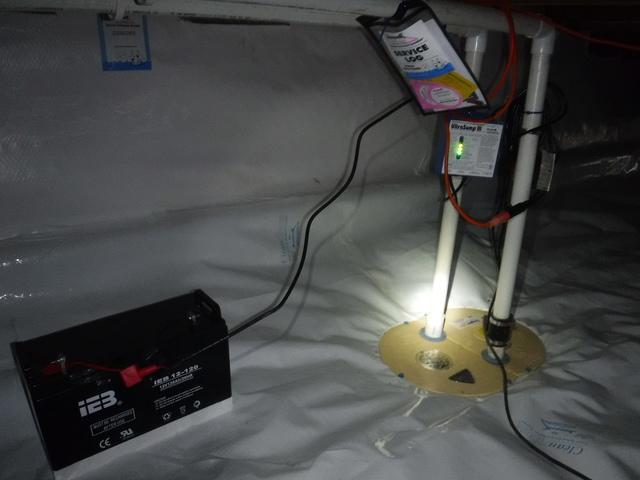 The TripleSafe has a primary pump and backup pump, allowing for a backup plan if the first pump fails or excessive water is coming in that one pump cannot handle alone. The first pump can output 2,018 gallons of water per hour, and together the pumps can remove up to 6,299 gallons! Also, with its battery backup system, the TripleSafe can continue pumping even in a power outage which commonly happen in storms. Connected to it is a WaterWatch Floor Alarm that will tell the owners if water is leaking on their floor again. 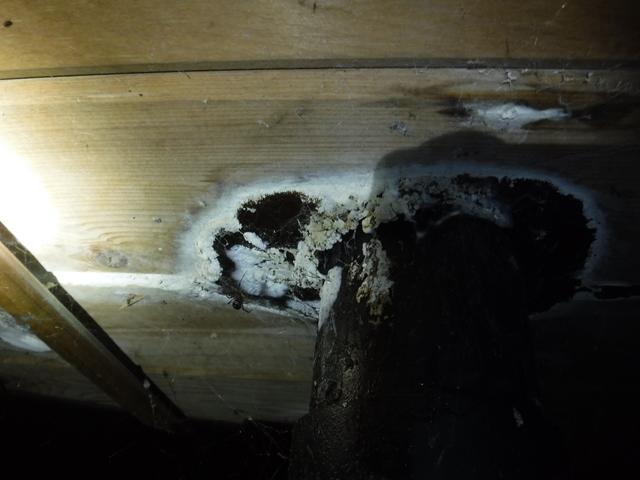 The atmosphere of the old crawl space gave mold/mildew everything it needed to grow and fester. Bugs such as spiders like rotting materials like wood. As the picture shows, spiders were making themselves cozy in the muck. 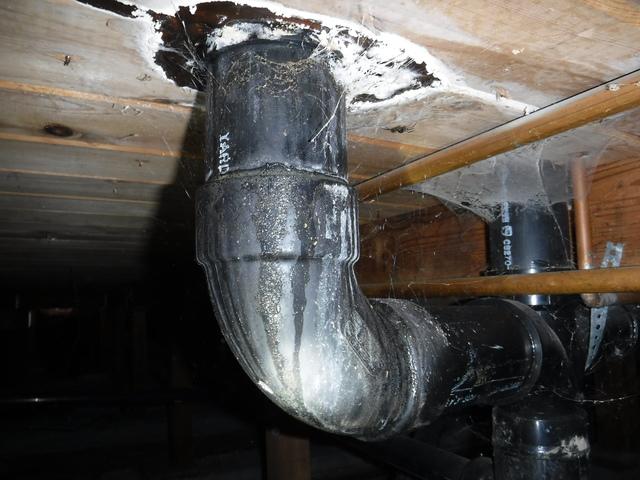 The moldy environment attracted bugs such as spiders, and the 13 open vents around the crawl space welcomed them right in. 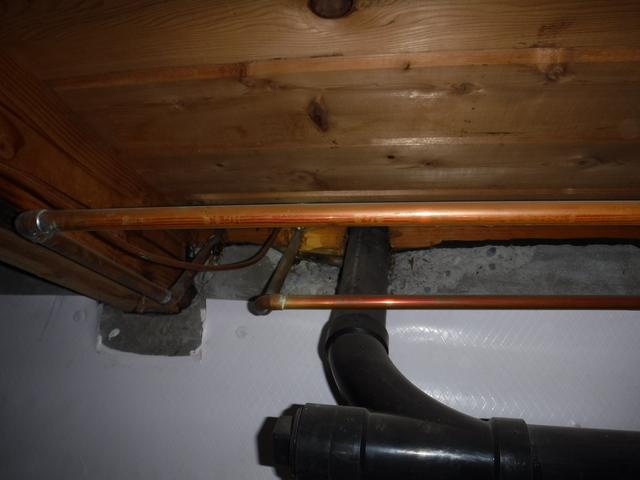 We placed SilverGlo and CleanSpace on the walls after we cleaned them. With their inorganic properties, these durable items will keep the prior water damage and pest invasion problems from happening. The installed vent covers and EverLast Door will also keep the crawl space clean and healthy. 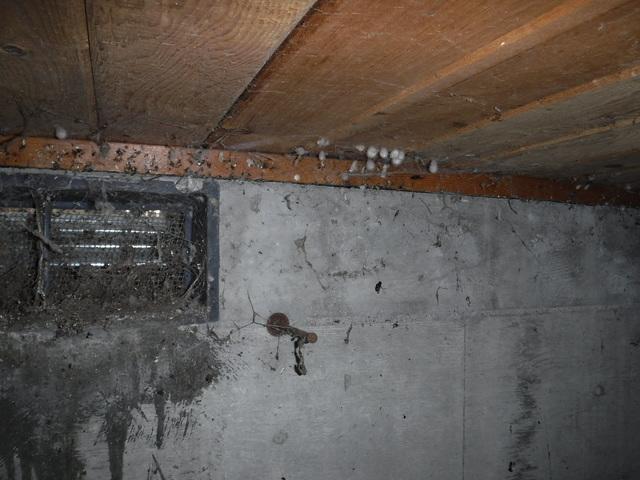 The open vents created entrances for dust, dirt, water, pests and more. Also seen in the picture are large spider eggs which were found all over the crawl space. 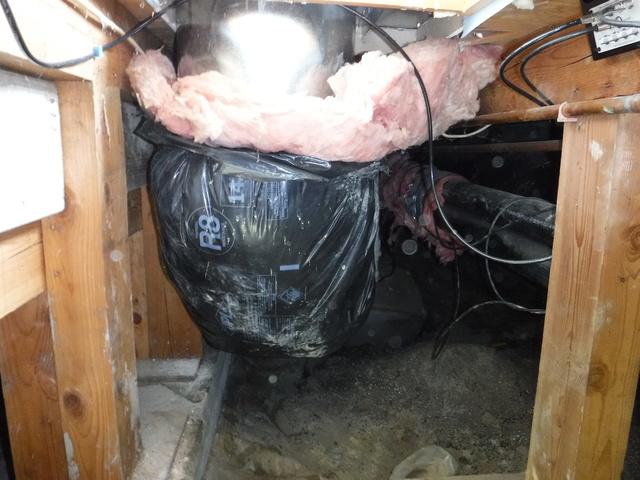