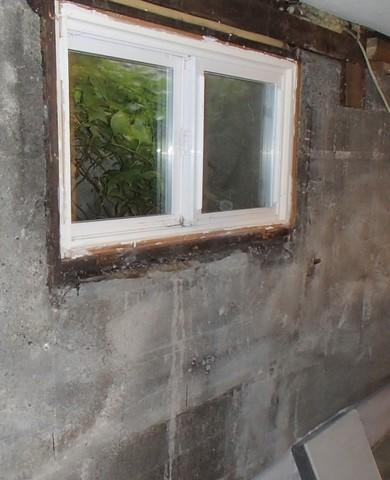 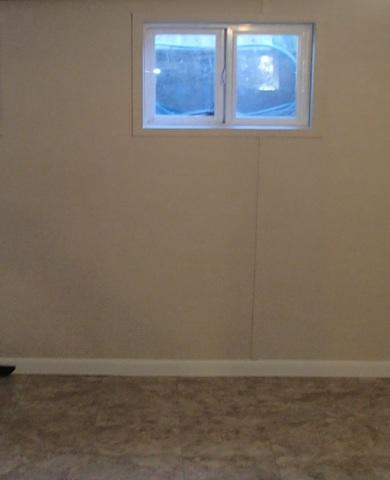 Like many parts of Washington, Bellingham commonly gets long periods of rain. Homeowners, Martin and Genn, had water frequently leaking into their basement stairwell and they knew that the situation was just going to get worse.

Their flooring and walls had water damage. Their basement, which was also their laundry room and storage area, was cold and unwelcoming. They did not want further damage to their home or items, so they contacted Rainy Day. After their free inspection and estimate, a plan was created to install a drainage system and restore the walls and flooring.

In the before picture, we removed the old walls and saw that the concrete around the window was moist and moldy. The prior walls did not seal tightly, leading to leaking, moisture, and mold which then damaged the walls and flooring, and contributed to the flooding. Additionally, the weak seal meant that outside air was also coming in, resulting in letting cold air inside in the winter and hot air in the summer.

The after picture shows the Total Basement Finishing EverLast panels (which are on top of Basement-to-Beautiful panels). All the panels fit snuggly around the pipes and windows, giving the room insulation in an attractive fashion. In addition, sandstone gray ThermalDry tiles on top of the cold concrete will help keep the temperature of the room under control whilst also making the room inviting. With this new snug seal on the inorganic walls and flooring, the homeowners don’t have to worry about mold, moisture, debris and air damaging their basement like before. They also won’t have to pay more to heat or cool a room that is not going to keep the desired temperature.

Pump and drainage systems will ensure that any water that does come into the basement will be disposed of fast and effectively, even on really rainy days. The TripleSafe pump system with two pumps, a backup battery, and alarm system will provide the homeowners with the reassurance that their basement will be safe even in the wet Washington weather. WaterGuard at the perimeter of the basement and TrenchDrain in the doorways and stairways will collect and direct any water to the TripleSafe. The LawnScape Downspout will safely discard roof water far from the house foundation, helping keep water from entering the basement. IceGuards were installed outside the home to avoid flooding from pipe blockage due to ice, snow and other debris.

For more pictures and information on this project, read the case study or view the photo album.

View All Before and After Photos