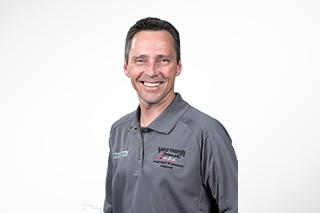 Kevin has been an indispensable asset to Rainy Day Basement Systems since he started in 2012. Having 20 plus years experience in commercial and residential construction, Kevin knows the importance of using the best products and methods available to create trusted permanent solutions for his customers and company. Kevin's experience working with homeowners, realtors, architects, engineers and building structures fuels his passion for helping people have healthier homes.

Kevin has held many roles within Rainy Day, including System Design Specialist and Service Technician. From there, he has moved his way up to become the Project Coordinator. He is also a "Certified Erosion and Sediment Control Specialist" through the state of Washington and an OSHA safety training graduate.

Kevin sincerely enjoys meeting with homeowners and always provides the best information and solutions based the objectives of the homeowner. Kevin loves the outdoors and exercise. In his free time you can find him rollerskating, fishing, snowboarding, golfing, and spending time with his family.

Customer Reviews
About Me
Testimonials
from customers I've helped!
View all Testimonials

Drainage and Restoration for this Bellingham...

Thursday, Nov 30th, 2017 11 Years as A Familymore »
Tuesday, Dec 20th, 2016 Rainy Day Employees Celebrate at the Annual Holiday Partymore »
Back to Previous Page Back to Meet The Team